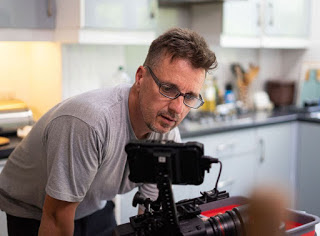 Matt Harris is a UK based director of photography and creative director based just outside London in the UK. He is the director and cinematographer of the new upcoming documentary "Rom Boys: 40 Years of Rad", released by 1091 Pictures in October and which recently won best feature documentary at the 2020 Paris Surf and Skate Film Festival. Rom Boys is the first feature length documentary to look at the early skate and BMX scene in London. Now married with two children (and three Staffordshire Bull Terriers), Matt began his visual image making career in the early 90's whilst living in the Cayman Islands in the Caribbean and the Marshall Islands in the Pacific shooting underwater stills and video of big wildlife and WWII shipwrecks. Now he runs a digital marketing and production agency but also shoots and directs anything from documentary to branded content, commercial and music videos for various production houses and brands around the globe. His first feature length film, Rom Boys: 40 years of Rad follows the story of the world's only historically recognised skatepark and the eclectic group of skaters and riders who have kept it thriving for the past forty years. Following a devastating fire the story then highlights the struggle a dogged group of old school skaters, BMX riders and street artists undertake as they team together to fight to keep the park open. The film also looks at the wider influence the skate world has had on UK urban culture from street art to fashion, music and graffiti with interviews from some of the worlds' biggest names in skate, BMX and street art from past and present from the UK and USA.
Interview at
http://www.beentothemovies.com/2020/10/interview-with-matt-harris.html