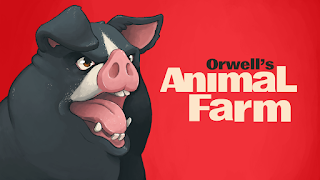 in 1945 George Orwell released an allegorical novella called Animal Farm, it is often hailed as one of the greatest books of all time.
Written during a time of war, and Stalinism, its basic premise is one of a critique of the rise of Communism. Pretty light stuff for a video game don't you think?
Well, some 75 years later a game has been developed whereby you can take the decisions, make the important choices and basically be part of the revolution.
The game itself is not really a "game" in the classic sense, it is more of a visual novel but with defined journeys and outcomes that you decide.