The Great - An interview with Sacha Dhawan and Phoebe Fox 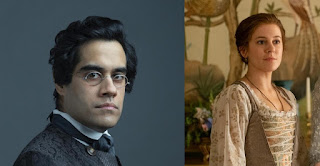 An interview with Sacha Dhawan
How would you describe the show and your character?
Orlo is Russia's first geek of books. A mostly ignored advisor to Peter (Hoult) whose job it is to bring some intellectual and legal framework to discussions. Under all that neurotic anxiety beats the heart of a Lion. He becomes Catherine's (Fanning) partner in crime.
The Great is an unexpected period show, loosely based on the life and rise to power of Catherine the Great. Its unique because it respects the period whilst throwing it out the window at the same time. For starters, I'm a British South Asian actor playing a character that is Russian from head to toe, and that's what the show does so well. It challenges the audiences perception right from the get go! I like to think of it as an ensemble of contemporary characters in a period setting, and the challenges and dilemmas they face are as vital as our dilemmas and challenges today.


An Interview with Phoebe Fox
How would you describe the show and your character?
The show is an irreverent take on the life of Catherine The Great. A costume drama with funny bones. I play Marial, a former lady of the court, now turned begrudging servant.

Read both interviews in full at
http://www.jonn.co.uk/2020/12/the-great-interview-with-sacha-dhawan.html