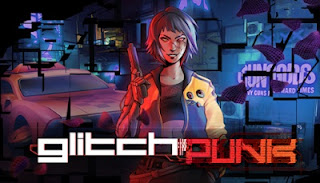 Welcome to the dystopian future! Developer Dark Lord and Publisher Daedalic Entertainment have announced Glitchpunk, a cyberpunk-themed game with an old school GTA 2 feel. Set to be released in 2021, Glitchpunk is a top-down action game where you shoot, brawl, drive, steal and sneak yourself through a neon-soaked world full of gangs and cults, forging cooperations along the way. A demo of the game is available during the Steam Games Festival: February 2021 from 3rd February to 9th February.

In Glitchpunk you play as a glitching android going against your own programming and challenging the tyrannical governments and megacorps of the dystopian near-future. Forge your own path in several cities full of drug-crazed gangs, aggressive police, and irresponsible drivers that make each mission and playthrough unpredictable. Steal cars and lead your enemies on a merry chase, fight them with a variety of melee and long-range weapons, and upgrade your own body with tech. But Glitchpunk isn't just about blowing things up, it also tells a story of transhumanism, xenophobia, and religion. You can influence the world around you, make new friends, face off against more enemies than you can count - and you might even find love.