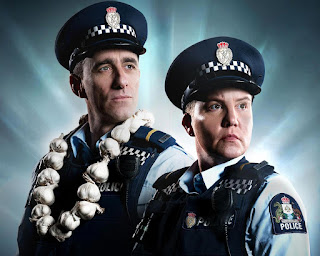 Cult mockumentary comedy from Grammy and Emmy award-winning Jemaine Clement and Oscar-winning Taika Waititi, Wellington Paranormal will be available this Spring on Sky. With all episodes of S1-S3 Wellington Paranormal available as a boxset from Monday 5 April 9pm on Sky Comedy and NOW TV.
There are some crimes normal cops can't investigate… Officers Minogue and O'Leary are invited to join the new Wellington Paranormal Unit of the Police when they unwittingly bring in a young woman possessed by the demon Bazu'aal; a demon who can jump from body to body and who is literally hell-bent on opening a portal to Hades in Cuba Street's iconic Bucket Fountain. With the help of their Senior Sergeant Ruawai Maaka, they succeed in banishing the demon thanks to some quick googling and so the Wellington Paranormal Unit is born.
For the rest of the series, our hapless duo investigate an alien invasion on a farm; meet a werewolf out for revenge on her ex; resolve a noise complaint at a haunted house full of ghosts from the 1970s; encounter the vampire Nick from What We Do In The Shadows stealing blood from the hospital, along the way investigating a ghost behind a dairy, a scary ritual in a park, some creepy clowns by the road and a couple of dreary goths in a cemetery; then in the exciting conclusion to the series, Minogue and O'Leary race to stop a pair of zombified cops from their station before they get to Courtenay Place on a Friday night and cause a zombie apocalypse! All in a series' work for our dynamic duo and their brave sergeant.
Wellington Paranormal looks like a typical police reality show in the style of Motorway Patrol or Police Ten7 but with X-Files-style paranormal events as the 'crimes' being investigated. The performances are realistic but funny using a cast of great comedic improvisers with scripts by exciting new writing talent.
The series was directed, produced and script edited by comedy legend Jemaine Clement with the help of director Jackie Van Beek and executive produced by Taika Waititi.