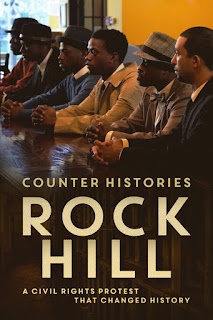 The story of the Friendship 9 carries huge significance in the battle to end segregation in Southern American states. The nine men's powerful and moving stand helped change history, but is one of the lesser-known incidents, among the many that shaped the civil rights movement of 1960s America.


Now the story of the heroes who chose to go to jail – serving hard labour sentences and rationed to bread and water – is told in feature Rock Hill – Counter Histories which is set for it UK premiere on digital on 26 April 2021, courtesy of Reel to Reel Films.
Some 40 years after a brave group of African Americans took up seats set aside for whites only at the counter of a café in the South Carolina town of Rock Hill, this groundbreaking documentary, which blends archive footage with recreations and new interviews with the protagonists, can tell the inspiring real tale of the Friendship 9.