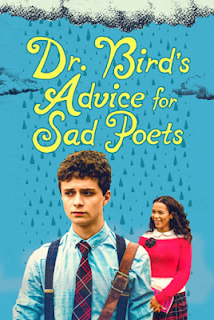 Enter the whimsical world of James Whitman (Lucas Jade Zumann), a 16-year-old boy obsessed with poet Walt Whitman, who's reeling from the disappearance of his beloved sister Jorie (Lily Donoghue ­– Dirty John, Black Christmas) and struggling with anxiety and depression. But his dysfunctional parents:  abusive father (Jason Isaacs) and careworn mother (Lisa Edelstein­­)  refuse to confront the issues so there's no one else to turn to except Dr Bird (voiced by Tom Wilkinson ­– The Grand Budapest Hotel, The Full Monty) a talking pigeon-cum-therapist.


Based on Evan Roskos's best-selling novel, (https://amzn.to/3vEFIzp) Dr. Bird's Advice For Sad Poets is a dream-like, fantasy drama that follows the trials and tribulations of James as he embarks on a mission to find his sister, win the affections of Sophie (Taylor Russell), a girl at school who joins him on his quest…but her ex- boyfriend Martin (Chase Stokes), could be a problem, as could the strange cult-like guru Xavier (David Arquette), who seems to know more than he's letting on.
The sometimes wild, sometimes hilarious, emotional and visually stunning quest takes the lovestruck teens into a magical realism-inspired world, and – via a strange cult – into the seedy underbelly of New York City's nightlife, where they encounter weird and wonderful parties and surreal situations. Their journey is interspersed with dream-like sequences, theatrical interludes, stunning dance scenes, talking paintings and more, that see James start to question everything he knows and makes him more determined than ever to get the help he needs for his mental health.
With stunning score from Jim Dooley (A Series of Unfortunate Events) and directed by Yaniv Raz in his feature debut, Dr. Bird's Advice For Sad Poets is fantastically fun and just what the doctor ordered; a little bird told us.
Released on digital 21 June 2021