Baddiel and Skinner join Adam, Alex and Josh for a 90-minute Euro 2020 special of The Last Leg this Friday

After 55 years of hurt, could football finally be coming home?
Last Leg of the Euros with Baddiel and Skinner, a 90 minute extended episode of the multi award-winning The Last Leg, will probe that very question this Friday at 10pm. Adam Hills, Josh Widdicombe and Alex Brooker will be joined live in the studio by none other than the Three Lions comedic heroes David Baddiel, Frank Skinner and legendary band The Lightning Seeds as they count down to the must see event of the year – the England v Italy Euro 2020 final.
With our enduring love affair for unofficial national anthem, Three Lions at an all-time high, the team will celebrate its 25th anniversary and ask whether Baddiel, Skinner & The Lightning Seeds might need to pen a new song come Monday morning…
Comedian Tom Allen, former Tory Party co-chairwoman Baroness Sayeeda Warsi and some surprise guests will also join the gang for an epic night of footballing fun, acerbic wit, unmatched satirical insight – and quite possibly, a monumental end of the show musical performance.
As ever, the hashtag #isitok will also play a key role in the night's proceedings.
Last Leg of the Euros with Baddiel & Skinner
Friday 9th July at 10pm on Channel 4 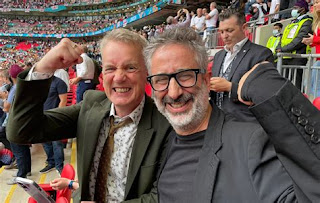