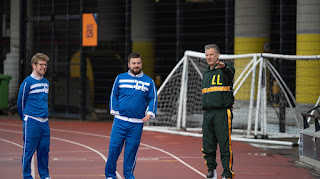 The Last Leg returns to its roots this August taking pride of place at the heart of Channel 4's prime-time schedule throughout the Tokyo 2020 Paralympic Games, bringing together 12 episodes of top-level sporting action and award-winning entertainment.
Adam Hills, Alex Brooker and Josh Widdicombe will present The Last Leg of Tokyo 2020 (12x60') live daily at 10pm on Channel 4 from the BT Studios in the heart of London's Olympic Village in Stratford, rounding-up and reflecting on the biggest sporting stories of the day.
Comedian Rosie Jones will be the show's roving reporter, bringing all the latest news from the ground in Tokyo. Rosie originally started her TV career as a researcher on The Last Leg for the Rio 2016 Paralympic Games.
Special guests will join the boys in the studio each episode including friends and family of the Paralympians. The show will also connect with Japan for live links and interviews with the competitors and medal winners.
Not ones to miss out on the action, The Last Leg of Tokyo 2020 will also see the boys have a shot and compete in 12 different Paralympic sports filmed at the London Olympic Stadium across three days. The sports will include wheelchair tennis, blind running, archery, wheelchair volleyball, kayaking, swimming, blind cycling plus many more. Representing GB will be Josh and Alex, while Adam will represent Australia, along with some special guest comedians as his honorary teammates.