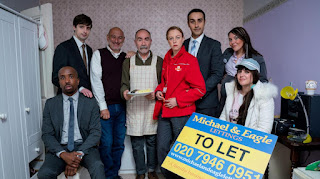 Filming has wrapped on Channel 4's critically acclaimed and triple BAFTA-winning comedy Stath Lets Flats, from the award-winning Roughcut TV.  The series is written and created by Jamie Demetriou, who returns in the lead role of Stath. Season three will feature some stellar guest stars, including Julia Davis (Nighty Night) who appears in one episode as Kris, Carole's belittling and snobbish sister; David Avery (We Are Lady Parts) plays Bambos, Stath's flash barber cousin …and Charlie Cooper (This Country) plays Gregory - a lettings agent who is passionately devoted to his wife and runs a rival agency called Live Love Lets.
The returning cast includes Natasia Demetriou (What We Do In The Shadows), Kiell Smith-Bynoe (Ghosts), Katy Wix (The Windsors), Ellie White (The Other One), Al Roberts (Feel Good) and Christos Stergioglou (Dogtooth) as Stath's father, Vasos. Season three will also see the following guest cast back; Emmy nominated Nick Mohammed (Ted Lasso), David Mumeni (Dead Pixels) and Tom Stourton (Siblings).  The new series will air later this year on Channel 4 and will be available on All 4.
The third series will pick up where the second finished with a shocking cliff-hanger as incompetent letting agent Stath (Demetriou) is faced with rescuing the family business, Michael & Eagle, and his relationship with Katia (White), while expecting his first child by Carole (Wix). Meanwhile his sister, Sophie (Natasia Demetriou), and best friend, Al (Roberts), deal with the fallout of finally declaring their feelings for each other.
Jamie Demetriou commented: "Times are the worst they have been in living memory, but fear not, a sitcom about a lettings agency is back for a third series! All the characters (bar a few who had availability issues) are back and saying stuff aaaall over again! Get ready to hear what they say! Listen closely and you might even hear a thing or 2 from some new celebrated guest stars. Did somebody say…. the whole England football team?? No, it'll be comedy actors!"