REVIEW: Struggling on XBOX One 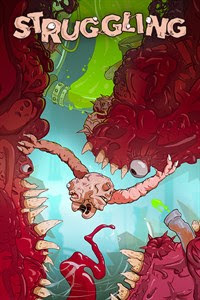 Struggling is one of the more bizarre games I have ever played, instantly memories of the disgusting failed experiment in the original "The Fly" film comes to mind.
You play as "Troy" a deformed monster created from Hector and Achilles, two heroes who were horribly conjoined, so two separate arms connected to a head. That is your character. Each arm is controlled independently, and to move, you throw one arm out and grab on to a surface, and then drag yourself along. This game can be played as a two-player game, but I played it only in one player mode. And to say the controls take some getting used to is an understatement.
Luckily if one arm is torn off, you can grow it back. This is a physics-based platformer, and you really need to learn the method of movement to progress at all in this game, from within the first moments of play you will be screaming at the game, it is incredibly frustrating, it is a huge "Struggle" I guess.