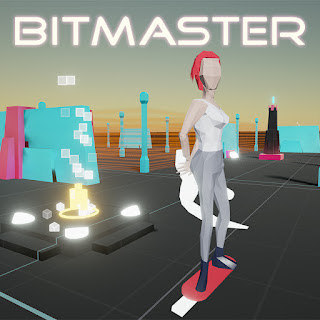 BitMaster seems like it should be a game made for Nintendo Switch, it is a twin stick shooter, you shoot at enemies while skating around on a hoverboard.
The game is described as being inspired by such classics as Geometry Wars, Crimson Land and Satellite Reign, but does it measure up?
There are 100 waves of enemies to face (20 different kinds of enemy), after 20 waves you will face a boss, and then another 20 waves and so on.
You can collect new guns and unlock new characters to play with, the environment changes colours, and different areas will benefit or harm your character.
For example, in one area your shield will regenerate faster, in another, your weapon may fire slower rounds.