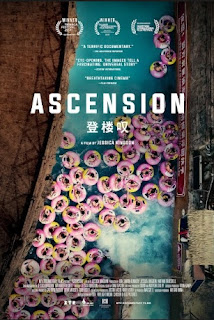 Oscar Shortlisted Documentary is one of the year's most acclaimed, with nominations for Best Documentary from the Independent Spirit Awards, Producers Guild of America, Cinema Eye Honors and the Gotham Awards.
MTV Documentary Films will release ASCENSION, one of the most acclaimed documentaries of 2021, on 14 January 2022 in UK cinemas. Directed, edited and shot by US based Chinese-American filmmaker Jessica Kingdon, the film is an exploration of the pursuit of wealth and the paradox of progress in modern China.  It examines what living the so-called "Chinese Dream" looks like today.  The film is nominated for 5 Cinema Eye Honors including Best Documentary, Best Director, Outstanding Debut, Best Cinematography & Best Score.  It was also nominated for Best Documentary by the Independent Spirit Awards, Producers Guild of America, Gotham Awards and Critics Choice Awards.  The film is also up for Best Cinematography by the IDA Documentary Awards.  ASCENSION had its premiere at the Tribeca Film Festival earlier in the year where it won Best Documentary.
ASCENSION is an impressionistic portrait of China's industrial supply chain that reveals the country's growing class divide through staggering observations of labour, consumerism and wealth. The documentary portrays capitalism in China across the levels of its operation, from the crudest mine to the most rarefied forms of leisure. Accordingly, the film is structured in three parts, ascending through the levels of the capitalist structure: workers running factory production, the middle class training for and selling to aspirational consumers, and the elites revelling in a new level of hedonistic enjoyment. In traveling up the rungs of China's social ladder, we see how each level supports and makes possible the next while recognizing the contemporary "Chinese Dream" remains an elusive fantasy for most.