REVIEW: RENO 911 The Hunt for QAnon 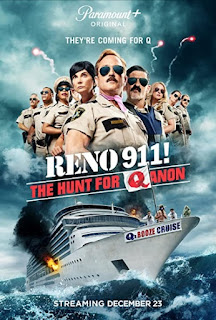 When I heard that they were gonna make a RENO 911 film about QAnon, I rolled my eyes, and expected it to be yet another ridiculous, far left, Hollywood attack on anyone vaguely to the right of Bernie Sanders.
However in RENO 911 The Hunt for QAnon I think they may have actually done the opposite to what they intended. (or the opposite of what the media is telling you the film is about)
Someone wants to sue Q, the mysterious secretive figure that supposedly knows all the secrets of the Government and elites, and also a big Trump supporter. So the Reno Sheriff's Department decide that they need to find Q so they can serve him papers.