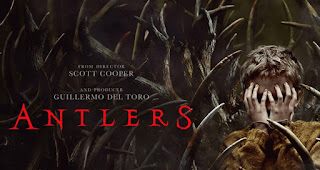 I hadn't seen or heard pretty much any publicity for Antlers, so I expected this to be your run of the mill supernatural horror film, but I was pleasantly surprised by this rather engaging film.
Directed by Scott Cooper, and starring the excellent Keri Russell, probably best known for FX spy thriller series The Americans, as a school teacher, one of her students is seemingly suffering from personal problems at home, but what she doesn't know is that he actually has a dangerous secret in his house.
The film starts off with Frank Weaver who runs a meth lab out of an abandoned mine, one day Frank is attacked by some kind of creature, along with his son Aiden, they survive,  we learn later on that their condition got worse when home, so he ordered his older son Lucas to lock them up.