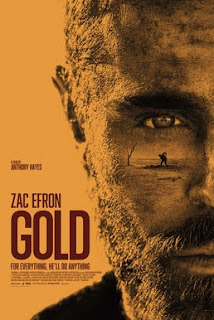 Gold is an "Australian Survival" film, directing by Anthony Hayes, who also stars alongside Zac Efron.
Zac Efron in what I can only assume is an attempt to be taken seriously as an actor, is all dirty in this film, dirty as in covered in dirt, dishevelled, grubby, however you want to describe it, it does seem that when an actor wants to move to that next level, if they are a woman, they "ugly themselves up" and if they are a man, they grubby themselves down.
Set in the Australian outback, Efron plays... erm.... "Man One", yes that is how he is billed, who is getting a lift from Hayes, (Man Two). The first 20 minutes is some of the dullest on-screen film I have ever seen.