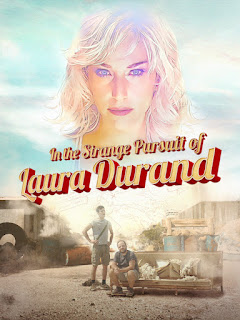 In the Strange Pursuit of Laura Durand is a Greek buddy road trip film that has finally made its way to the UK, and gets a Digital Download release from 31st January'
Antonis Titsanis (played by Makis Papadimitriou) and Christos Fertakis (played by Michalis Sarantis) are two young men, down on their luck, loser type characters, no jobs, poor living conditions and really just letting life pass them by, surviving on Christos' unemployment benefits.
But from within this sad existence, they do have a common love interest. The beautiful Laura Durand, (Anna Kalaitzidou) a 1990s porn star who mysterious disappeared, one day after watching an old VHS tape and reminiscing about her career, they decide that they should solve the mystery of her disappearance and go on a mission to track her down, after they have a vision of her almost summoning them to save her.