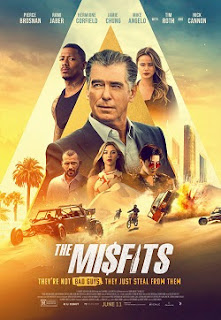 Pierce Brosnan stars as Richard Pace, a renowned international thief, he finds himself recruited by a bunch of unconventional thieves, he is convinced to take part in an elaborate gold heist after realising his daughter is the one that created the group.
But unlike most thieves, "The Misfits" are in it for the good, think of Robin Hood and you get the idea.
The plan is to steal millions in gold bars from a secure vault hidden under a maximum security prison, the prison is owned by rogue businessman Schultz (Played by Tim Roth), and is used for funding terrorism around the world.
When the film was released, it caused great controversy, as it is set in Qatar and the idea that they may fund terrorism might not be something they want advertised, even if it is in a film.
What follows is a pretty paint by numbers heist film, suped up cars, car chases, disguises, cons within cons, and a few explosions, and you get the idea.
Pierce Brosnan is Pierce Brosnan, he is cool, calm and collected, as he is in almost every film he makes.
Tim Roth plays his part as the evil businessman well, but again it is a part he has seemingly played endless times before.
The rest of the cast are very generic and bland. One black guy, one Asian girl, one blond girl, etc, it is yet another "one of each" type of casting, as to not piss off any ethnic group.
The Good
I am a fan of Heist movies, and The Misfits rips pretty much all of them off, without ever really improving on any of them, but does it really need to? It ticks all the boxes, has the twists, if like me, you enjoy a good heist movie, then this is perfectly fine.
The Bad
This is a film made for an international market, as I mentioned it is very paint by numbers, tick all the boxes kind of film, you will watch it once, and forget about it.
Overall
A film no one asked for, we don't really need, but it is not terrible, it is also not great, it is just another film.
I score The Misfits a fair 5/10