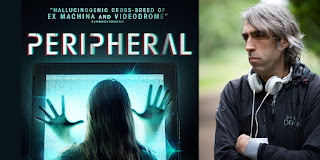 Ahead of Horror Channel's UK TV Premiere of PERIPHERAL, director Paul Hyett talks about directorial ambitions, twisted technology, and why aliens aren't interested in us.
How did you become attached to Peripheral?
The producer Craig Touhy and I had been friends for a while and we'd nearly done another movie together. He'd liked the claustrophobia and tension of The Seasoning House so we met up to discuss Peripheral. When he pitched it to me, very much a low budget, contained movie, in one apartment. I must say I was a little hesitant. I wanted to broaden my directing and do bigger scope. Craig persuaded me to at least read it. I did and loved the script. The story, the character of Bobbi, of this writer blocked, being forced to adjust to what is wanted of her, and having to succumb to a technology that ultimately fucks her in so many ways and being forced to write for a corporation that she hates. It all felt so very relevant.
Was the cast already in place and what's it like directing legends such as Jenny Seagrove and Tom Conti?
No we cast from the ground up, Jenny Seagrove was the first cast, I was so happy we got her. She loved the script and the character of Merlock. She was an absolute joy, so professional, so excellent and willing to discuss everything