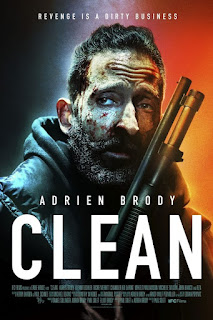 Clean, directed by Paul Solet is about a bin man called Clean, played by Adrien Brody, he has a long violent history, and is trying to lead a life of redemption. But soon ends up having to deal with a crime boss who has targeted him.
Adrien Brody having written, produced and acted in this film, clearly sees this film as a vehicle for him to display his many skills. Now whether it is Nominative Determinism, or just a nickname, Brody plays a character called Clean, who is a trash collector, or Bin Man was we say in the UK. He has lost his daughter, which we find out through flash backs, and has befriended a next-door neighbour, who acts as something of a replacement daughter for him. Dianda (played by Chandler DuPont) has lost her mother so lives with her Grandmother. Clean helps out when the Grandmother is busy, or just plain neglectful of her granddaughter, and takes the girl to school or out for dinner. Yes, I know it all sounds a bit strange but it's a plot point needed for the film.