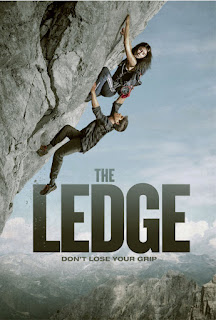 A low budget climbing adventure horror film you say? Well, I don't mind if I do Sir.
A couple of friends decide to go rock climbing, but when Kelly (played by the lovely Brittany Ashworth) witnesses the murder of her best friend Sophie by a group of young men, she has to find a way to escape before she becomes their next victim.
It all starts when the two girls befriend a tight knit group of men, who have dark secrets that have cemented their bond. Of course, with young men and young women about, that means only one thing in a film like this, a really unlikeable man, who decides to try his luck and end up killing someone. A woman who witnesses the killing, and then a bunch of friends all sticking together and trying to get rid of the only witness, along with her video camera.