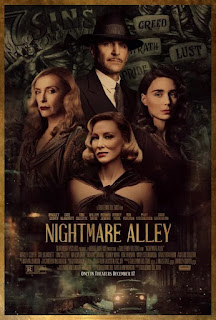 Guillermo del Toro is back with Nightmare Alley, a film that is sure to get plenty of awards. Based on a 1946 novel by William Lindsay Gresham of the same name, stars Bradley Cooper as Stanton Carlisle, we first get introduced to Stanton as he is burning down his family home, and escaping whatever life he previously had. He visits a travelling carnival, and upon watching a few shows, he manages to convince the boss to give him work. He soon befriends Zeena the Seer played by the excellent Toni Collette, a fake psychic/clairvoyant. Early on in the film we get to see the secrets behind some classic psychic trickery, including a famous mentalism trick where by a code is used between two people to give the illusion of transmitting information psychically. She performs this trick with her husband Pete (David Strathairn), in front of Stanton, and just as it seems he is being convinced, they reveal how it is done.


Stanton eventually asks Pete to teach him all the tricks of the trade, and we then get the birth of "Master Stanton", with his new assistant Molly played by the lovely Rooney Mara.
What follows is a fascinating and very high-quality film, whereas usually the monsters of Guillermo del Toro films are creepy and horrifying, the monsters in Nightmare Alley are very much the psychological evils of the people involved.