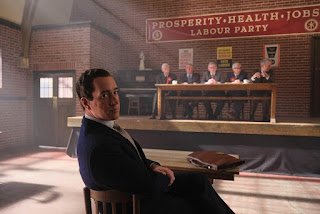 The life and times of disgraced Labour minister John Stonehouse will be dramatised for ITV by writer John Preston and Matthew Macfadyen, in the lead role and Keeley Hawes (Honour, It's A Sin) co-starring as Stonehouse's wife Barbara.
Stonehouse, a high-flying member of Harold Wilson's Government, vanished from the beach of a large luxury hotel in Florida in November 1974, leaving a neatly folded pile of clothes as he swam into the sea, intent on faking his own death. The three-part drama is directed by BAFTA-nominated Jon S. Baird (Stan & Ollie, Vinyl, Filth) with BritBox International as co-production partners.


Matthew Macfadyen:
"What happened to John Stonehouse is the stuff of legend.  I've always been intrigued by what motivated him to fake his own death, and leave behind the family he loved and doted upon and a promising political career. John Preston's script truly captures the man and his colourful life and I'm looking forward to taking on his character."


As a stunned public and media assumed he had drowned or been eaten by sharks, the MP for Walsall North left behind his loving wife Barbara and three small children.
Stonehouse had charmed Prime Minister Harold Wilson and Labour stalwarts from an early stage in his parliamentary career, radiating charm and bursting with confidence. He came from a working-class family, graduated from the London School of Economics, served in the Royal Air Force during WWII, and seemed like the perfect fit for a career in politics.
As the storey progresses, it becomes clear that his image as a dedicated family man was a lie, as he'd had an extramarital romance with his secretary, Sheila Buckley, and worked as a spy for the Czech Secret Service.


His complex financial status and relationships eventually took their toll, with Stonehouse deliberately stealing the identity of a recently deceased constituent. Stonehouse applied for a passport in the dead man's name and began to weave an elaborate conspiracy, seeking a new life in Australia. But his plans soon turned sour as Stonehouse was arrested by Australian police who had been under the mistaken impression that he was the fugitive peer Lord Lucan.
Brought back to the UK by Scotland Yard detectives, Stonehouse found that he was crucial to keeping the Labour government in power with its wafer-thin majority.
The drama will also star Emer Heatley (Showtrial) as Stonehouse's mistress Sheila Buckley, Kevin R McNally (The Crown, Unforgotten) as Harold Wilson, Dorothy Atkinson (All Creatures Great and Small, Mum) as Betty Boothroyd and Igor Grabuzov (Voskresenskiy, No Looking Back).