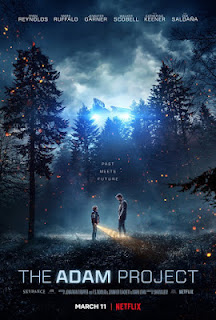 One of the more popular actors of modern times, Ryan Reynolds is back in his latest Netflix film.
Directed by Shawn Levy, The Adam Project stars Ryan Reynolds as Adam Reed a fighter pilot in 2050, the film starts with him in his jet being chased in the upper atmosphere of Earth, before you know it, he has opened a wormhole and travelled back in time to 2022, and crash lands. He goes to the only place he knows will exist in 2022, that being his family house. He is injured and needs medical help.
With all the usual Time Travel clichés thrown out of the window, big Adam soon meets little Adam, (Played by Walker Scobell), and reveals who he is. And before you know it, they have teamed up on a mission to save Laura Reed (Adams future wife, played by Zoe Saldaña).
Confused yet? Well big Adam jumped to the wrong time, he meant to go to 2018, which means more time travel, and then meeting up with Adam's father who died in 2021, who just so happened to have invented time travel.