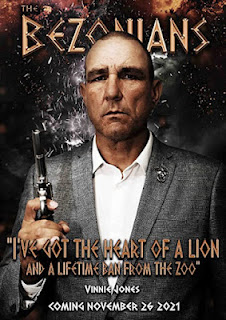 A film about Greek Cypriots in London? Why yes, I would be happy to review! Since I am Greek Cypriot and I grew up in London, I consider myself something of an expert on the genre.
The Bezonians is the name of a social club of sorts in London, run by a character called Plato (played by Andreas Karras), where various generations of Cypriot immigrants come to socialise and gamble away their hard-earned wages, as well as drink and party deep into the night.
We meet a mixture of characters, the super cool Achilles (Savvas D. Michael), the tough guy Costas (Peter Polycarpou), Mavro Mike (Chris Tummings) and Anthony (Jamie Crew), most days it is just about a bit of weed dealing, partying with girls, and gambling, but one night Plato gets goaded into a game of poker with Lola (Lois Brabin-Platt), but she is a hawk, and wins big, and if Plato doesn't pay up the £50,000 he loses, then her boyfriend Willard Greb (Vinnie Jones) will come to collect.