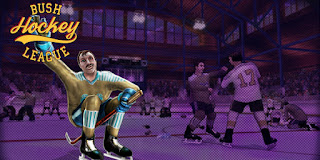 Bush Hockey League is an ice hockey game set in the 1970s, Bush Hockey League is the name of the fictional league you will play.
There are two modes of play, an Exhibition Mode, which is your classic, jump into the action type game. And the Story Mode.
You can choose to play with Retro Controls or Advanced controls. The lack of any kind of instant tutorial mode, will really leave you trying to figure out the controls yourself, which is so frustrating, as when you first play, you will have no idea what button does what and end up losing your first game by a huge margin. Way to go developers, make a game that instantly puts off the player! Not like you didn't have 5 years to figure out the basics for porting this game to Switch.