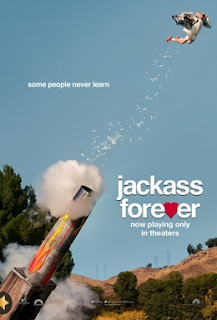 The opening scene of this film is possibly the most insane thing you have ever seen. When I say they have a REAL Godzilla sized penis destroying a city, I am being completely serious!
Now unless you have been living under a rock for the past 22 years, Jackass is simply described as adult, slapstick, comedy sketches.
Jackass Forever is the 4th film in the franchise, and sees all your favourite Jackass stars return with the exception of Ryan Dunn who sadly died in a car accident in 2011.
Johnny Knoxville is the captain and his crew include Danger Ehren, Steve-O, Dave England, Chris Pontius, Wee Man and Preston Lacy, and joining them are a number of new crew mates and a few celebrities too.