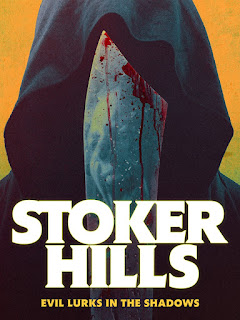 From director Benjamin Louis come Stoker Hills, a horror film about three college students, Ryan (David Gridley), Jake (Vince Hill-Bedford) and Erica (Steffani Brass) who as part of their college degree decide to make a horror movie set in their small town of Stoker Hills. But before they even get going, Erica is thrown in a car and kidnapped, Ryan and Jake chase after them, but they escape.
While exploring a forest nearby, they find an old seemingly abandoned building, inside they come across mutilated bodies and medical equipment.
We see much of this action through the "found film" they were using at the time. But this isn't all Blair Witch self-filmed horror, we cross to the detectives who are examining the film, we switch between the detectives investing and the tapes themselves as the film progresses. Will the detectives find the kids in time? Who is the kidnapper? Watch the film and find out.
Strong performances from David Gridley, Vince Hill-Bedford and Steffani Brass who carry the film, which is clearly on the lower budget side of Hollywood. And although the film is pretty standard fair, there is a nice twist at the end, which you would expect from any half decent horror.