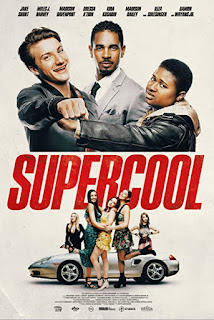 Been a while since I have seen a Teen based comedy. I remember the classics like Porky's or American Pie which still stir the memories today, Supercool at its base is a film about a virgin wanting to get laid, but unfortunately in the modern era you just can't make comedies like that anymore, so from the start Supercool is limited in where it can go. Saying that however it does have its moments.
The film stars Jake Short and Miles J Harvey as Neil and Gilbert, they have just started their senior year of high school, so I think that would be 17 or 18? Both Neil and Gilbert have high hopes and aspirations.
The film starts with school kids on the school bus, suddenly a masked man with a gun gets on the bus and kidnaps Neil's crush Summer (Madison Davenport) and throws her in a van. What follows is a pretty awesome scene, with Neil and Gilbert taking control of the school bus, chasing after the kidnapper, and rescuing Summer, but it is all just in the imagination of Neil, who drew the scene in his notebook.