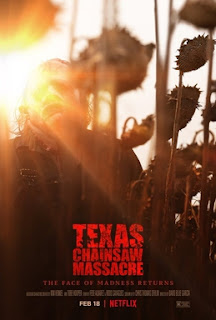 I am a big fan of your classic slasher films from the 80s, the original Texas Chainsaw Massacre was a bit before my time, and I never really got into the franchise, I was more of a Friday the 13th fan. Well, we have a new Texas Chainsaw Massacre, this one is a direct sequel to the original 1974 film, and the 9th film in the franchise. I thought I would check out this new version to see what all the fuss is about.
50 years have passed since the original mass murders of the mid 1970s, Melody (played by Sarah Yarkin) her sister Lila (Played by Elsie Fisher), Dante (Played by Jacob Latimore) and his girlfriend Ruth (Played by Nell Hudson) have travelled to Harlow, a town in Texas, they plan to auction off old properties, so that the area can be modernised with new businesses, and turn what is a somewhat abandoned town, into a new trendy place to live.
One of the first places they go to look at is an old orphanage, the orphanage is supposed to be empty, but they find out that an old woman called Ginny (Alice Krige) is living there, they point out to her that the house has been sold and she shouldn't be there, but Ginny claims to have proof she is still the owner, a towering figure appears in silhouette at the top of the stairs, while an argument breaks out between Ginny and our protagonists. Ginny collapses with a heart attack, the police arrive, and say they will take her to hospital, the man comes downstairs to help, the police say that he is "her boy" as he picks her up and puts her in the ambulance (Police wagon).