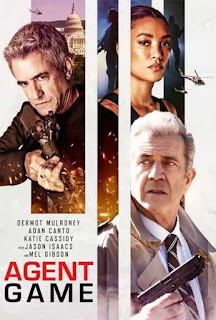 With Bruce Willis having to take a back seat due to his health, Mel Gibson seems to be the man to step up and take his seat in the "Low Budget, hardly in the film" chair.
The basic synopsis of Agent Game is as follows
"A CIA officer finds himself the target of a rendition operation after being scapegoated for the death of an interrogation subject."
The film starts off with Mel Gibson sat on a bench in the middle of the day, on a quiet street. He sees something, which has him reach for his gun and start shooting at an unknown target. This is also the very final scene of the film, but with added context.
The film does seem to jump between multiple timelines, which adds to the confusion.