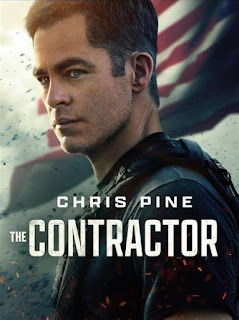 I am not quite sure how they managed this, but they took a film with a decent sized budget, paid some big name actors to appear, and then made a film that comes across as if it was a low budget Bruce Willis or Mel Gibson film.
Chris Pine stars as James Harper, he finds himself involuntarily discharged from the United States Army Special Forces due to his use of narcotics to treat a nasty knee injury. With no income after losing his pension and a dodgy knee, Harper contacts his friend Mike (played by Ben Foster) who works with a private military company run by fellow veteran Rusty Jennings (played by the always entertaining Kiefer Sutherland). Now it is worth noting for Kiefer fans, that he isn't in the film much, which is such a shame, because when Kiefer has good writers behind him, he has shown consistency in putting in awesome performances, sadly in The Contractor he is given something of a side role.
Anyway, Rusty runs clandestine operations for the US Department of Defence and Harper signs on for a mission in Germany. Rusty gives an advance of $50,00 to Harper, so he can pay off his debts, and off Harper goes to Germany.