REVIEW: Death on the Nile (2022) - Starring Kenneth Branagh as Poirot 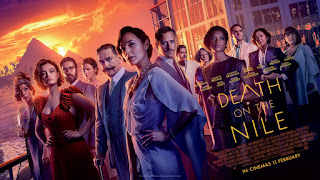 The Renowned detective Hercule Poirot is back, in what is the 3rd version of the Death on the Nile story by Agatha Christie. Kenneth Branagh once again takes on the role of the man who no one can quite pronounce his name.
The start of the film sees a young Poirot in World War 1 helping his unit attack the enemy, but a trip wire ends up being activated and a fellow solider gets blown up, and Poirot finds himself with a mutilated face. While being treated by his fiancé, Nurse Katherine (Susannah Fielding), she tells him that he can grow a moustache to hide his scar. Sadly, she dies in WW1, and we quickly jump to 1937.
Poirot finds himself watching a blues singer, Salome Otterbourne (Sophie Okonedo), he sees Jacqueline "Jackie" de Bellefort (Emma Mackey) dancing with Simon Doyle (Armie Hammer).  Jackies childhood friend Linnet Ridgeway-Doyle Gal Gadot) enters the scene and is introduced to Simon, and now we have pretty much been introduced to the main cast.
Quick look at the official synopsis:
"Renowned detective Hercule Poirot is off on a relaxing retreat to Egypt, where he meets his friend Monsieur Bouc. He offers Poirot to join him and his mother at his friend's post-wedding celebration. Poirot arrives at the hotel and recognizes the newly married hosts: Linnet Ridgeway and Simon Doyle. Six weeks ago, he had seen Simon Doyle with his fiancé Jacqueline at a nightclub. Jacqueline had introduced her fiancé to her best friend: Linnet. Poirot scoffs at how love took its turn in a short period. Bouc introduces Poirot to all the passengers on the cruise:"