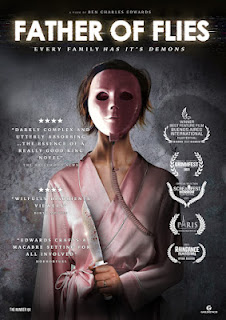 Father of Flies is a psychological horror from director Ben Charles Edwards.
We are introduced to a family in America, the father of the family Richard, played by the late Nicholas Tucci, has broken up with his wife Linda (Sandra Andreis), who is having a hard time with mental illness. He invites his pregnant girlfriend Coral (Camilla Rutherford) to move in with him, and his children in his house in the mountains. Coral is pregnant and soon to be Michael (Keaton Tetlow) and Donna's (Page Ruth) stepmother.
For some reason Coral likes to wear a super creepy face mask, that makes her look more like Michael Myers than anything, but this is what women go through as part of their beauty regime, or so I am told.
The children are unhappy, Michael has hearing issues and is terrified of monsters under the bed, Donna is a rebellious teen going out with her boyfriend, and doing the usual teen things, and they both hate the new set up with Coral, and as she moves in, that is when things go from bad to worse, as a supernatural entity seems to come with her.