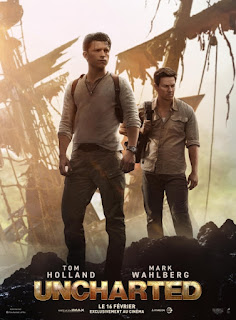 As the big Hollywood blockbusters are coming thick and fast, the latest one is Uncharted, based on the Uncharted video games made by Naughty Dog.
I have played a few of the games, so was interested to see if the film matched up.
Tom Holland stars as Nathan Drake, the lead character from the video games. Mark Wahlberg plays Victor Sullivan, with Sophia Ali, Tati Gabrielle, and Antonio Banderas in supporting roles
The film starts with Brothers Sam and Nathan "Nate" Drake as they are caught by museum security trying to steal the first map made after the Magellan expedition. Sam is kicked out of their shared orphanage,  but before he leaves, Sam promises to return to Nate, and gives him a ring with the inscription "Sic Parvis Magna".