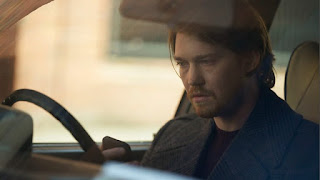 Frances (Alison Oliver) is observant, cerebral and sharp. Her ex-girlfriend, now best friend, Bobbi (Sasha Lane) is self-assured, outspoken and compelling. Though they broke up three years ago, Frances and Bobbi are virtually inseparable and perform spoken-word poetry together in Dublin. It's at one of their shows that they meet Melissa (Jemima Kirke), an older writer, who is fascinated by the pair.
Bobbi and Frances start to spend time with Melissa and her husband, Nick (Joe Alwyn), a handsome but reserved actor. While Melissa and Bobbi flirt with each other openly, Nick and Frances embark on an intense, secret affair that is surprising to them both. Soon the affair begins to test the bond between Frances and Bobbi, forcing Frances to reconsider her sense of self, and the friendship she holds so dear.


Joe Alwyn - plays Nick
Why did you want to be involved in Conversations With Friends?
I was a big fan of Sally Rooney's writing beforehand, I read Normal People and Conversations With Friends after being recommended them by friends. I got through them very quickly. I've also been a big fan of Lenny Abrahamson for a long time, I love his films and everything he's made - what he did with Normal People was extraordinary and so the opportunity to marry the minds of Sally and Lenny - and be part of that - was very exciting.
What would you say are some of the key themes in the series?
Conversations With Friends is full of all different themes, but at the heart of it it's about love, intimacy, desire and relationships. It's about how we are able to love and find happiness both within social constructs that we're more used to - whether that be within friendships, families or relationships - but also outside of those things, and how we're able to find other ways of loving and growing outside of more conventional constructs.