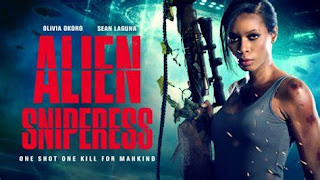 Since my last few reviews were all big Hollywood type films with huge budgets, I thought I should get back to what I know and love, that being low budget Independent films. And the latest in that genre is Alien Sniperess.
Who even knew that there was a feminine version of the word Sniper, in Sniperess. Totally unnecessary, but alas that is what we have, so lets not complain too much.
In a totally original, and never seen before plot point, the film starts with a meteor shower, and of course there are some kind of alien creatures within the rocks, that in turn infect humans, turning them into alien hosts. A bit Zombie like, but they can fire guns.