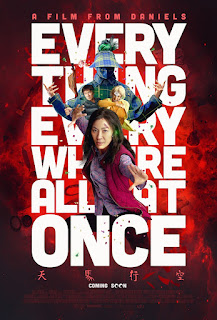 First of all, what a great name for a film, how has no one thought of "Everything Everywhere All at Once" as a film title before?
Directed by Daniel Kwan and Daniel Scheinert, collectively known as "Daniels", hence the "Film from Daniels" on the poster, the film is an absurd, crazy, multiverse genre, big-hearted, sci-fi action adventure. Michelle Yeoh stars as Evelyn Quan Wang, an unhappy and overwhelmed laundromat owner, who is facing an audit from the IRS and the threat of losing everything to the tax man. Evelyn is married to Waymond Wang, (Ke Huy Quan), he is a calm, patient, meek and goofy husband. And together they are trying to bring up their daughter Joy Wang played by Stephanie Hsu. You may also recognise James Hong as Gong Gong, Evelyn's demanding father, who has just arrived from China. James Hong has been in more films than I can think of, and at 93 years old, is an absolute legend in the business.
The film is separated into 3 parts, Everything, Everywhere and All at Once, hence the name of the film.