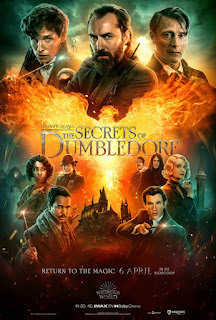 I have never been a fan of the Harry Potter films, so not sure why I am reviewing what I believe is the 11th film in the J. K. Rowling's Wizarding World series, but here we are.
Fantastic Beasts: The Secrets of Dumbledore is the third of a trilogy of films, I don't think I saw the first 2, I may have but I see so many films, I have probably forgotten them.
In the time before the events of the Harry Potter films, there is another dark wizard who wants to take over. Isn't there always. Gellert Grindelwald (Mads Mikkelsen) gathers an army around him and it's up to magic zoologist Newt Scamander (Eddie Redmayne) to stop him. Professor Albus Dumbledore (Jude Law) can no longer hold back and must intervene against Grindelwald's crimes, and a man he once called his friend. Together with a group of wizards and a brave Muggle, they go to war against the bad guy.
Now if you think this all sounds familiar, that is because it is, it is basically the same story as the previous films from what I can gather, but then if a franchise is making money, why not ring it dry.
The biggest problem with this film is that if you are not deeply familiar with the books and previous films, you will find it rather hard to know what the hell is going on, who is who, and what is what. I hear the name Scamander and I first think of an old ancient Greek God, and then I think of the bad guy from one of the old James Bond films!