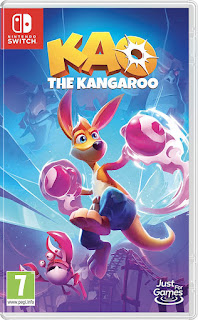 I have been playing and enjoying Kao the Kangaroo on my Nintendo Switch Lite now for a few days, what a great little game here. What I didn't know was that Kao is part of a long running series of games going back over 20 years. Kao the Kangaroo (2000) - Dreamcast, Kao the Kangaroo: Round 2 (2003) - PS2, Xbox, Gamecube, Kao Challengers (2005) PSP and Kao the Kangaroo: Mystery of the Volcano (2005) - PC. So, there is a rich history right there across multiple consoles. But with any cute platform game, I think it is fair to say the Switch is the perfect home.
The story goes as follows, Kao's sister has gone missing, and it is up to Kao to not only find her, but also solve the mystery of what happened to his lone gone father. Kao needs to travel the world and confront various famous fighters who are influenced by the mysterious dark power.
Kao has his own Master in Walt who will help guide our hero. And along the way Kao will make new friends and strengthen old friendships.