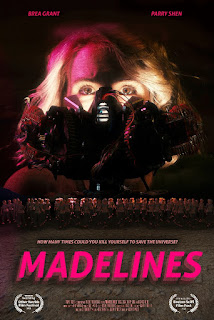 With a short run time of less than 80 minutes, I was pleased to see that there was no messing about at the start of the film, no stupid set ups, no long character development, just straight into what you came to see. Madeline (Brea Grant) and Owen (Parry Shen) have found a way to invent Time Travel. They conduct experiments in their garage funded by private investor, Rory Devonshire (Richard Riehle) who hopes to one day make a fortune from Time Travel. They manage at first to successfully send an orange into the future, just a short distance, enough that they can watch the orange disappear, wait a minute, and it re-appears, after a failure with a small pet, and an argument with Owen, Madeline figures things out and puts herself in the machine. So far so good.
Madeline travels to the future, and after an hour re-appears in the garden. The problems begin the next day when Owen is attacked by Madeline, he accidentally kills her, but wait, Madeline walks out of the house. They soon realise that there was a mistake in the code, and 3600 Madelines will appear in the garden, one per day, for the next 9+ years.