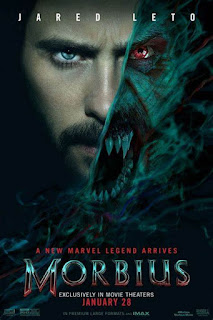 Morbius is the latest superhero film from Marvel, and based on the character from the comic books.
Now before this movie I had never actually heard of Morbius so I am coming to this as a total noob with no expectations or knowledge on the character at all.
Morbius is the third film in the Sony Spider-Man Universe (SSU), which basically means you will eventually get cross over of characters from various films with the Spider-man films being the centre point that connects everything else. With that said there is no Spider-man in this film before you get too excited, and other than the end credits scene, this does play as a stand-alone film, which is perfect for me.
Directed by Daniel Espinosa and written by Matt Sazama and Burk Sharpless, it stars Jared Leto as Dr. Michael Morbius, alongside Matt Smith, Adria Arjona, Jared Harris, Al Madrigal, and Tyrese Gibson.
The film starts off with Morbius landing in Costa Rica and going to a cave full of Vampire Bats, before you know it the story quickly shifts back to a children's hospital in Greece, a young 10-year-old boy called Michael Morbius meets a young boy called Lucien, he gives him the name Milo, (which means apple in Greek) they share a blood illness which instantly bonds them, as well as a wish to be healthy.