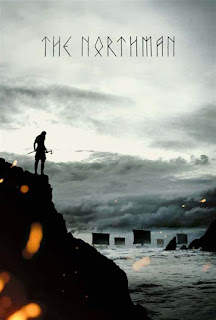 Another day, another review, this time The Northman an epic historical fiction film directed by Robert Eggers and starring Alexander Skarsgård and based on the legend of Amleth.
The basic plot sees Amleth, (Alexander Skarsgård) a Viking prince who sets out on a quest to avenge the murder of his father.
Set in the year AD895, the film starts with King Aurvandill War-Raven (Ethan Hawke), returning from battle to his Kingdom on the Island of Hrafnsey. He reunites with Queen Gudrún (Nicole Kidman) and his young son Prince Amleth.
The King wants to prepare his son to one day become King, so they take part in a spiritual ceremony, which involves a lot of crawling about and howling like wolves. The next day Aurvandill's brother Fjölnir (Claes Bang), and some masked men, ambush and murder the King, and take Queen Gudrún, Prince Amleth escapes, and swears to avenge his fathers death, save his mother, and kill his uncle.