REVIEW: Tony and Clyde on PS4 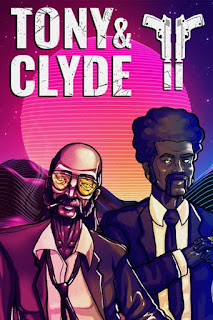 "Tony and Clyde" is a simple shooter, you play as either Tony or Clyde, who the game loves to tell you are not simple thugs from the streets but also not highly trained criminals or professionals.
The game is played through chapters, as you play you will learn about Tony and Clyde, who they are what they want, all told through the various hand drawn 2D cutscenes. Basically, they are small time crooks wanting to make it big.
The gameplay itself is from a third perspective top-down viewpoint. You control your characters movement with the left stick, and the direction of fire with the right stick. Frustratingly the bumper button controls the firing and the trigger button controls the changing of weapons. Why they did it this way round is anyone's guess. It is called the TRIGGER button for a reason! Aiming is a bit hit and miss, so you will want to pay attention to your loadout and which weapons you have. Since the aiming is a bit rough, I went for weapons that had large magazines, so that I could spray the area with bullets before the slow process of reloading.