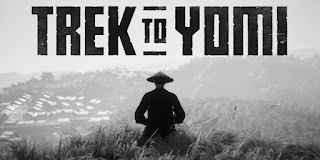 Trek to Yomi is advertised as an ultra-stylised cinematic action-adventure, and the first thing you will notice when playing is the monochrome graphics, basically black and white.
The game is set in Japan, in the Edo period, you play as a young Samurai Warrior called Hiroki who after making a vow to his dying Sensei, goes on an epic journey to confront the people responsible for destroying his village.
This side scrolling game is very much a one player journey, Hiroki must face wave after wave of enemies, and avenge his Sensei.