REWIEW: Doctor Strange in the Multiverse of Madness (2022) 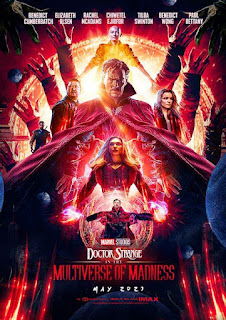 As this is a big release, worth noting that this review does contain mild spoilers.
Benedict Cumberbatch is back as Dr. Stephen Strange, his mission this time is to protect America Chavez (Xochitl Gomez)
In the film, Strange travels into the multiverse to protect America Chavez, a teenager who is capable of travelling between universes, from Wanda Maximoff / Scarlet Witch (Elizabeth Olsen)
I will say that this film is cameo heavy, and to really get the most out of it, it helps if you are a big Marvel fan and have seen a lot of the various films and TV shows, if not, you might find yourself wondering who the hell someone is, or googling every ten minutes trying to figure it out.