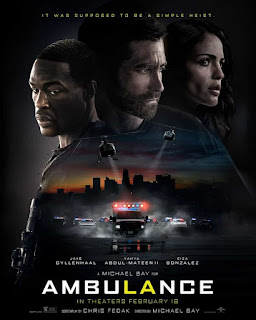 Ambulance is one of those films that comes out of nowhere, I saw no promotion for this film, no PR team got in contact with me, I had no idea it existed, and when I saw it Prime video, I thought I would give it a look. I thought it would be another low budget film. However, this film had a moderate budget of about $40m, is directed by Michael Bay who is known for outstanding action scenes, and has big name actor Jake Gyllenhaal in it.
Ambulance is based on a 2005 Danish film of the same name by Laurits Munch-Petersen and Lars Andreas Pedersen. The basic story sees two adoptive siblings turned bank robbers who hijack an ambulance and take two first responders' hostage.
War Vet Will Sharp, played by Yahya Abdul-Mateen II is in need of $230k for his wife's surgery, he reaches out to his adoptive brother Danny Sharp, played by Jake Gyllenhaal for help. Danny convinces Will to help with a $32m bank heist, although reluctant at first Will realises that this would help solve all his problems and agrees.