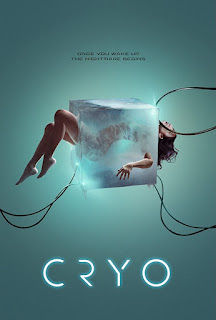 A simple premise, 5 people wake up from cryosleep, but can't remember anything about themselves including who they are or how long they have been asleep. Before you know it they are being hunted by an unknown assailant.
A pretty simple concept that on paper should lead to a claustrophobic type of horror thriller. Usually this kind of story has people waking up on a spaceship, but this time we are definitely underground on Earth.
So, let's delve a little deeper.
We start of in some kind of underground facility, five scientists wake up, and find themselves released from some kind of cryo chamber, as they wake up, they quickly realise that none of them has much memory about anything. They understand that they were part of some kind of experiment and slowly remember what their roles were, but that's about it, they don't even know their names, just a number on their clothes. There is no one there to welcome them, to check their health, no one at all, despite their chambers having to be opened from the outside.