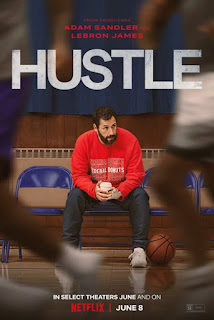 After a down-on-his-luck basketball scout discovers an extraordinary player abroad, he brings the phenom back without his team's approval.

I genuinely can't remember the last rags to riches sports film I have seen, so when I saw "Hustle" pop up, I thought I would give it a look, plus it stars Adam Sandler who I happen to think is great.
Now I am not a big basketball fan, and other than a few very big names, (Shaq, Lebron and Magic Johnson) I couldn't really tell you who was who, and which team was the best. So I come to this film purely as a casual viewer, and not a fan of the sport.
Adam Sandler stars as NBA scout Stanley Sugerman, who scouts for the Philadelphia 76ers, his life mainly consists of him being on the road constantly looking for the stars of tomorrow. While the owner of Philadelphia 76ers Rex Merrick (Robert Duvall) likes him, Merrick's son and co-owner Vincent (Ben Foster) seems to clash with Stanley on a philosophical level when it comes to the game.
Due to the toll that the travel is having on his home life, Rex promotes Stanley to assistant coach, which means he can spend more time at home with his wife Teresa (Queen Latifah) and his daughter Alex (Jordan Hull), but just as he does that Rex passes away and his son is left in charge. Three months later and Vincent demotes Stanley back to the scout position, and sends him overseas to find a new star for the team.