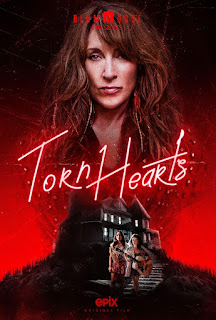 One complaint I often get is that I don't review enough Country and Western Horror films! Well today I will do just that with Torn Hearts made and released by Blumhouse Television and EPIX
Torn Hearts is something of a cautionary tale, about why you should perhaps not meet your heroes. Set in the world-famous Nashville Country Music scene, two young women are trying to make it big. Jordan (Abby Quinn) and Leigh (Alexxis Lemire), perform as a duo under the name Torn Hearts. After performing on stage, they catch the eye of a "bigwig" in the industry and they are introduced by their manager.
Growing up the women were big fans of a Country act known as The Dutchess Sisters, so when they have the chance to record with the remaining living member of that duo, Harper Dutch (Katey Sagal), they jump at the chance.
Dutch lives alone, and hasn't released any new music in many years. When the women arrive at her house, things immediately seem a bit off, Harper Dutch does seem keen to record with them though, but not before she makes them jump through some hoops.